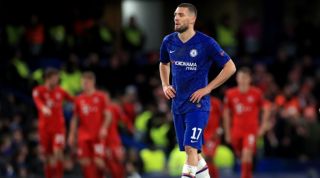 Mateo Kovacic was the only Chelsea player manager Frank Lampard singled out for praise following their 3-0 Champions League last 16 defeat to Bayern Munich.

The Blues have an uphill task to stay in the competition ahead of the second leg at the Allianz Arena in three weeks' time after being humbled at Stamford Bridge.

Serge Gnabry scored twice and Robert Lewandowski netted the other, while Chelsea also had Marcos Alonso sent off late on.

"They need to understand the levels that the Champions League is when they get to the knockout stage," Lampard told the Metro.

"I thought there were a couple of performances in our team, namely Kovacic, who played with a personality and a quality that makes you go; 'Okay, he can play in pretty much any team with that level.'

"Other than that we need to say tonight wasn't a night where we showed that, and that's on an individual to take responsibility."

On what was a sorry night for Lampard's side, Tammy Abraham also limped off late on with what looked to be yet another injury.