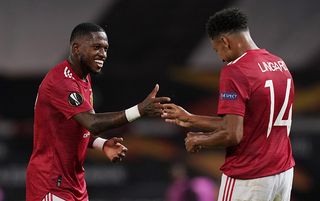 Read the full interview with Fred – and Andy Mitten’s expansive cover feature with exclusive insight from Old Trafford via Manchester United insiders – in the next issue of FourFourTwo, out on September 23.

In the meantime, you can still grab our jam-packed 196-page season preview special...

Manchester United midfielder Fred has quashed reports that he could leave for Galatasaray this summer.

Tabloid stories had linked the 27-year-old with a move to Turkey, after Ole Gunnar Solskjaer made Ajax’s Donny van de Beek his first signing of the summer in a £40m move.

After a disappointing debut season in England by his own admission, Fred impressed with a far improved 2019/20 and started 23 Premier League matches as United finished third. He was also a first-choice option after lockdown as United reached the Europa League semi-finals.

Despite the increased competition, Fred – speaking in the October 2020 issue of FourFourTwo magazine, a Manchester United special which hits shelves on September 23 – is adamant that his future lies at Old Trafford.

Subscribe to FourFourTwo from just £3.77 an issue, delivered straight to your door every month

“I want to stay here – that’s my desire,” he told FFT. “I don’t want to leave. As I’ve always said, I want to be an important player and win trophies for this club.

“[Van de Beek’s arrival] means we’re getting stronger and that’s good for everyone at United.

“We need more players for this season because it will be even more demanding: the calendar is crammed and we need a strong squad to compete for every title. When you play at a big club, there will always be competition – I’m used to it. It’s been like that from day one at United.”

Fred was pleased with his season on a personal level, but was pragmatic about a campaign in which United reached three semi-finals and failed to scoop silverware.

“We can’t say it was a good one, because we didn’t win a trophy,” he admitted. “For a club like Manchester United, it’s not a good season without a title.

“We managed to reach three semi-finals but lost them all. We were close to our goals, but they just didn’t come our way – I was really confident that we would win something, but it didn’t happen.

“At least we managed to play good football at times during the campaign, and qualifying for the Champions League was very important because this club must be in that competition. It was crucial to get our place back, but that alone isn’t enough: we want to fight for that title, too.

“The good thing is that we’re improving as a team and I think we’re heading in the right direction. Trophies will come our way soon.”

Read the full interview with Fred – in which he discusses his time at Old Trafford so far, Fergie's dressing room visits and the worst loser at United – in our forthcoming issue, out September 23