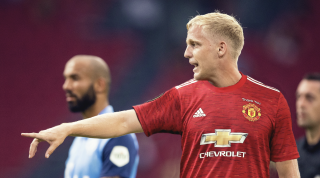 Donny van de Beek became Manchester United's first signing of the summer on Wednesday, joining the Red Devils from Ajax for an initial £35m fee. While the deal represents great business at first glance, precisely where he will fit into a midfield already containing Bruno Fernandes and Paul Pogba is a bit of a head-scratcher.

Here, we take a look at how the goalscoring midfielder might be used by Ole Gunnar Solskjaer this season.

As a rotation option

The most likely eventuality is that van de Beek is used as a rotation option in Solskjaer's preferred 4-3-3 formation. This lineup allows the Norwegian to field as many of his attacking options as possible, while also ensuring the defence is protected by a dedicated defensive midfielder - in this example, Scott McTominay.

Solskjaer waited until the 87th minute of Manchester United’s Europa League semi-final defeat to Sevilla to make any substitutions; proof that he lacks faith in his backup options. van de Beek will help remedy that, with the Dutchman most similar in style to Bruno Fernandes from United's current midfielders.

United are over-reliant on Fernandes for goals and creativity, and van de Beek’s arrival should lessen that burden, and also give Solskjaer opportunities to rest his key man without sacrificing shape or quality.

In a midfield diamond

United’s lack of natural wingers means a diamond could make perfect sense, despite the fact the formation has fallen out of favour slightly since the early-00s. This set-up would allow Solskjaer to field Pogba, van de Beek and Fernandes all at the same time, with Nemanja Matic protecting the back four.

van de Beek and Pogba would operate just in front of the towering Serb, collecting passes from deep and shuttling forward to combine with Fernandes. The Portugese appears more at home further up the pitch in No.10 role than he does in deeper positions anyway.

Rashford and Martial are forwards who naturally peel wide when United are in possession. This, as well as the attacking instincts of the two full-backs, would provide the team’s width. In theory, it’s a formation which plays to everybody’s strengths, but is it too narrow in the modern era?

As a deep-lying playmaker

According to Ajax coach Frank de Boer, van de Beek plays his best football “in the No.6 position”, or in other words, as a deep-lying playmaker. This does not mean as a defensive presence, but rather a player that collects the ball from the defenders before building attacks.

Pairing van de Beek and Pogba as a double pivot in a 4-2-3-1 would give the side a remarkably creative base when building attacks. It would also allow Fernandes to operate further forward and get Rashford and Martial in their preferred forward roles. Mason Greenwood, a striker by trade, excelled in a wide-forward position in the latter half of last season and Solskjaer will want to give him chances to play again this year.

The issue would be when United are on the back foot. Pogba is tall and strong like Matic, but lacks defensive discipline, while van de Beek is neither robust nor renowned for his defensive contribution. Undoubtedly the most thrilling option for fans going, but one which might expose a glass jaw.