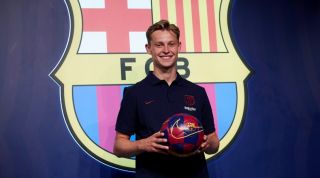 The 22-year-old sealed a £65 million switch to the La Liga champions this summer after playing a starring role in Ajax’s run to the Champions League semi-finals.

De Jong’s form earned the serious attention of several big European sides but, at his own admission, he expected to follow in the footsteps of former Gunners forward Marc Overmars.

“In my mind I have had the following list for a long time: Ajax-Arsenal-Barcelona – ​​call it the Marc Overmars route,” he told Voetbal International.

“But then again, if you can go directly to Barcelona, ​​then you're right where you want to be. Faster than you ever dared to dream.”

Barça have also been linked with a summer swoop for De Jong’s former team-mate Matthijs de Ligt, but the centre-back now appears set for a move to Juventus.

The Netherlands international admitted that he would prefer to have his compatriot by his side in Catalonia next season.

“He has to make that decision with his family. When I saw Barça wanted me to play here, the decision was very easy.”