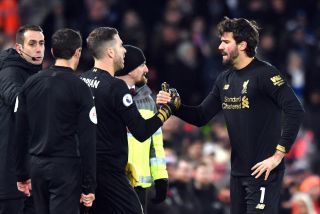 Liverpool goalkeeper Alisson Becker has been ruled out of next week’s crucial Champions League tie at home to Atletico Madrid.

The Brazilian sustained a hip muscle problem in training and is likely to be out until after the international break at the end of this month.

After three defeats in four matches in all competitions, Jurgen Klopp’s side can get back to form when they face Bournemouth on Saturday looking to a set a new English top-flight record of 22 successive home league wins.

However, with a 22-point lead at the top of the Premier League, Wednesday’s last-16 second-leg tie at home to Atletico is of far greater concern following a 1-0 first-leg loss.

“Unfortunately Ali is out. He had a little incident in training before the Chelsea game,” said Klopp.

“We all thought it was nothing and it was clear he would not play anyway, the plan was he was on the bench.

“There, we thought, ‘Come on, we don’t have to take any risks’ so left him out of the squad.

“[There was a] scan the next day and they found something. So now he is out. We will see next week for sure and then we will see.

“Next week no, that means Atletico. I don’t want to say no (to the Merseyside derby on March 16) but I don’t know if he will be available.

“He is not available for tomorrow and then the next week. We have to judge the situation anew.

“I would say after the international break 100 per cent. Whatever we can get before that, we will see.”

Alisson was not in the Brazil squad named on Friday for matches against Bolivia and Peru later this month.

It means Liverpool will again rely on back-up Adrian, whose error led to the first goal in the 2-0 FA Cup defeat at Chelsea on Tuesday.

He stood in for 11 matches when Alisson injured a calf on the opening day of the season, keeping just two clean sheets, and has managed three in 16 appearances in total this season.

By comparison Alisson has 12 clean sheets in 28 matches, including 10 in 20 Premier League games.

And with third-choice goalkeeper Caoimhin Kelleher also injured it means 36-year-old Andy Lonergan, a summer free transfer whose last match was a 3-1 League One victory for Rochdale against Scunthorpe last March, will continue on the bench having done so at Stamford Bridge.

The last time Liverpool lost three in four matches was at the end of the 2017-18 season but Klopp insists there is no need to worry about their latest wobble.

“Of course winning gives you confidence, losing costs you confidence and it is completely normal you start thinking about things,” added the Liverpool boss, who dismissed their poor run of form since the winter break as merely coincidence.

“It is how you get back on the result track immediately and you can do that not by hoping that things are clicking even better that the game before, but you have to work hard and fight back to get back on track.

“We want to fight and that is what we want to show. It is about making the probability as big as possible that we win the next match.

“We can’t hope for momentum, we have to work for momentum. We never took it for granted before and we don’t think it is impossible to do it again.”