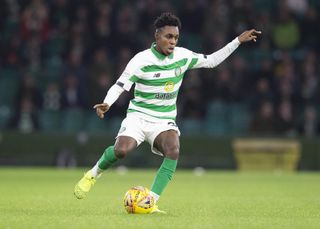 Celtic full-back Jeremie Frimpong has vowed to work hard to make the Parkhead faithful proud after making a big impression in his first two months at the club.

The 18-year-old summer signing from Manchester City made his Ladbrokes Premiership debut in Saturday’s 6-0 victory over Ross County, contributing an assist and exciting the home crowd throughout.

His only other appearance in a Celtic shirt came in the 5-0 Betfred Cup win over Partick Thistle last month and, although he is less than two months into his Hoops career, the fans already like what they have seen from the youngster.

Frimpong, who will miss Celtic’s home clash with Lazio on Thursday because he is not registered for Europa League games, has set his sights on repaying the fans for the warm welcome he has received.

Frimpong said: “I’m going to keep working hard, keep making the fans proud, my team-mates proud and the manager proud. That’s all I want to do.

“The fans are great and they’re really great to me.”

Frimpong lauded the impact Neil Lennon has had on him in his short time at the club, revealing the manager has helped him make improvements to his crossing.

He also identified Brazil right-back Dani Alves as a player he has taken inspiration from over the years.

“Me and Neil, sometimes we work on my crosses and that’s really improved because when I first came I would get there but my end product wouldn’t be that great,” he added.

“So we’d stay behind and he’d give me some balls and I’d just whip them in so I think that’s a real improvement now.

“He’s been the best right-back in the world. He likes attacking and defending as well.”

Frimpong spoke about his experience of racism in football when he was younger and insisted he would not walk off the pitch if he encountered it again.

He said: “In the past when I was younger I did get some of that. I went away with Man City – to Italy – and the fans were being racist.

“It’s come back a bit. The England game v Bulgaria, things like that – what’s the point? It kills the mood, the game of football, it just kills it.

“I wouldn’t walk off the pitch, no. I would just ignore them and then at the end of the game talk to them and ask ‘why did you do that?’.

“I’ll still play and I’ll play so hard to get a goal. It would just motivate me more. And when we win, I’ll love that.”