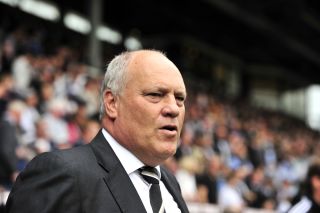 Ian Holloway's side have lost their last four games in the Premier League, scoring just once during that run.

However, Fulham are just two places above second-bottom Palace in the table and Dutchman Jol wants to ensure his players put daylight between themselves and Monday's opponents with a win at Selhurst Park.

"It's not easy to go away from home to play against these teams," Jol said on Thursday.

"They're a strong team and it will be difficult but I think we've got the qualities and the players to get a result. It's the Premier League, so it will be difficult, but hopefully we'll get the points because we need these points to get up the league table."

Captain Brede Hangeland could recover from a back problem in time for the trip to Selhurst Park, with Scott Parker and Dimitar Berbatov also in line to feature.

Hangeland and Berbatov were withdrawn during Fulham's 1-0 win over Stoke City while Parker suffered a calf problem in the 2-1 defeat to Cardiff City.

"Scott Parker will train with us on Friday so hopefully he'll be fine because he's back again," Jol continued.

"Berbatov will be back and Aaron Hughes will train on Friday.

"Everything is fine because all the international players came back and looked good."

Jol could also welcome back Ashkan Dejagah, with the Iran international featuring in his country's 2-1 win over Thailand on Tuesday.

Once he returns to full fitness, Jol backed Dejagah to rival other wingers at the club for a starting berth.