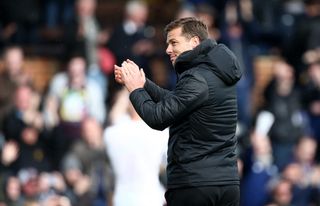 Fulham caretaker boss Scott Parker has his sights set on delivering the club’s first Premier League away win of the season on Saturday.

The relegated Cottagers head to Bournemouth already preparing for life back in the Championship.

A decision on who will be at the helm for the challenges ahead remains to be seen.

Parker replaced Claudio Ranieri in February, but was not able to halt the slide towards relegation.

The 38-year-old, though, feels there are positive signs following last weekend’s 2-0 home win over Everton, which ended a nine-match losing run.

“It is going to be a tough task for us (at Bournemouth). We have not won away from home this year, but I feel like we are going into it with massive confidence from the weekend,” Parker said.

“Of course it’s going to be difficult, but it is one which we are looking at thinking we can try and get some points.

“I have stated many times my main objective is to put a team out that is well prepared, has a clear idea of what we want to do.

“Certainly that takes time, I understand that, it is a process, but the Everton game was one that was pleasing for those reasons.

“Player-wise, they are starting to see the rewards for their hard work over the last few weeks.”

Bournemouth will be in confident mood themselves following a 5-0 romp at Brighton, which all but secured their own top-flight status once again.

Parker is full of admiration for the way Eddie Howe’s men continue to punch above their weight.

“We are playing against a very, very good team who have got a first-class manager,” Parker added at a press conference reported on the Fulham website.

“They are a team and a football club who have really put themselves as a firm fixture in the Premier League and that is credit to Eddie Howe and what he has done.”

Defender Timothy Fosu-Mensah continues to be assessed on a knee ligament problem, so Parker could be forced to change a winning line-up.

Tim Ream has challenged his team-mates to make sure they finish the campaign on a positive.

The American defender said to FulhamFC TV: “We have approached this week the same as we did for Everton, so we are going to do what we can to pick up points.

“You can only go out to do your best, to try to win matches and to put yourself into being in a stronger position, a stronger unit going into the Championship (next) season.”