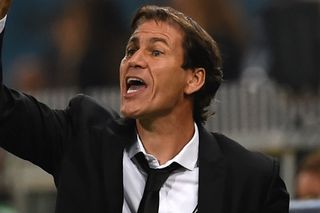 Garcia's men copped a brutal 7-1 thrashing from Bundesliga heavyweights Bayern in the UEFA Champions League, and the capital club bounced back to take a point from their Serie A trip to Genoa on Saturday.

Roma sit second in the table, with one loss in eight, but Sampdoria have four wins and four draws so far in their faultless campaign - and Garcia noted their performance was full of merit.

"When playing against an unbeaten team that is third in Serie A, we had the right attitude and standards, which shows me we have already put Bayern behind us," Garcia told Sky Sport Italia.

The former Lille boss added: "We had 65 per cent possession, but then you need a little bit of luck, which we saw when the upright decided we should not score.

"I liked the overall performance in the circumstances.

"We had 20 shots on goal, but not enough of them were on target tonight, well below our usual standards.

"I thought everyone gave their all and had the right attitude, so a coach can only be happy with that."

The recent floods in the north-west Italian city saw an affected pitch played on at the Stadio Communale Luigi Ferraris, but Garcia did not use the surface as an excuse - claiming his side did not deserve to win.

"It was difficult to move the ball quickly and accurately on a pitch like this," he said.

"Looking at the statistics, we didn't have enough shots on target to hope for the three points."

Garcia hinted his men were suffering from fatigue, and injuries to midfielder Kevin Strootman and defender Leandro Castan made rotation difficult.

"I don't think we are missing the players specifically, but it is forcing us to play the same men almost always in central defence and midfield," he said.

"I had to rest [Miralem] Pjanic and we saw [Alessandro] Florenzi give his best in a different role.

"The main problem with the injuries is that the same players are always there and inevitably that affects fitness levels."