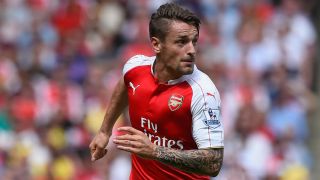 Debuchy has been ousted as Arsenal's first-choice right-back by Hector Bellerin this season, and is thought to be desperate for more playing time in order to bolster his chances of a place in the France squad at Euro 2016.

Garde is keen to bolster his defensive options, especially with right-back Alan Hutton currently nursing an injury, and has revealed an interest in more than one possible signing from Arsenal.

Garde was criticised by Chelsea boss Guus Hiddink for going public with his interest in signing forward Loic Remy last month, and the former Lyon boss was wary of upsetting Wenger in a similar fashion.

"It's too early. It won't help me or anybody to go forward to make any more comments about that today," he added.

Garde later insisted he is not planning to allow Jack Grealish to leave the club on loan this month despite reports linking him with Leeds United.

"He started the last Premier League game versus Sunderland. I wouldn't start a player a week ago and then say 'go on loan'," he said.

"I'm relying on Jack, but like other players he could be better."

"He has gone back. The player was not happy about his situation at this football club and not playing," he continued.

"When I arrived he was not totally fit, I don't know exactly what happened between August and the beginning of November. He was not always injured but he trained with me. It was my decision and he's gone back to Liverpool."

Villa face Wycombe Wanderers in the FA Cup third round on Saturday.