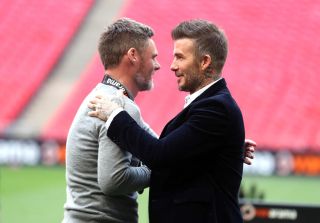 Salford co-owner Gary Neville admitted there were times he did not like himself for having to make “clinical” decisions that helped set the club on the path to promotion into the Football League.

The former England defender joined some of his fellow members of Manchester United’s ‘Class of 92’ – including David Beckham and Ryan Giggs – to cheer on at Wembley as Graham Alexander’s side beat AFC Fylde 3-0 in the Vanarama National League play-off final.

It completed a remarkable rise for the club since Gary and his brother Phil joined up with Paul Scholes, Nicky Butt and Giggs to take control of the Ammies in 2014.

Beckham also bought into Salford City in January when he purchased a 10 per cent stake, with Singapore businessman Peter Lim holding the remaining 40 per cent.

Under the new structure, Salford’s Peninsula Stadium has been redeveloped to a capacity of over 5,000, which will from August host Football League matches for the first time.

The rise up from English football’s eighth tier has not been a straightforward one, despite all of the significant investment.

Joint-managers Anthony Johnson and Bernard Morley were replaced by Alexander at the start of the National League campaign, with Salford eventually finishing third and coming through a penalty shoot-out over Eastleigh to book their place at Wembley.

“It is not easy, you have a lot of understanding of how difficult it is,” Neville said to BT Sport following Salford’s victory.

“You have to make tough decisions. We have been really clinical at times over the last five years and sometimes you don’t like yourself for it.

“Four promotions in five years – we said we would do it in eight, and we thought that was quite aggressive.

“But once we got the momentum and on a roll, we just thought ‘right, lets go for it’.

“It is tough, but we have done it and we are so proud and delighted. Five years ago we had 180 fans, now we have got a few thousand here, so it is amazing.

Neville added: “I don’t know how we have got out of it. It is an illogical league, amazing and so competitive, but we got there in the end.”

Emmanuel Dieseruvwe had fired Salford in front in the 15th minute following a defensive mishap.

A tough one to take here today, but our congratulations to @SalfordCityFC on their promotion to the Football League. pic.twitter.com/4Vzow4f97S— AFC Fylde (@AFCFylde) May 11, 2019

A powerful header from defender Carl Piergianni early in the second half and a somewhat fortunate third by full-back Ibou Touray completed what was in the end a comfortable victory.

Salford manager Alexander told reporters after his side’s win: “With all the great comebacks this week I just couldn’t rest until the final whistle.

“It is the way you want to win promotion.”