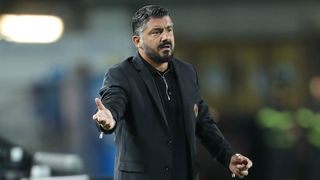 Alessio Romagnoli's poor turnover in defence led to the concession of a late penalty that allowed promoted Empoli to snatch a 1-1 draw on Thursday.

Lucas Biglia had opened the scoring in just the 10th minute, but his foul in attempting to atone for Romagnoli's mistake means the Rossoneri have now squandered seven points from winning positions.

Milan head coach Gattuso refused to single out Romagnoli for criticism, instead expressing frustration with a collective lack of killer instinct.

"At the moment we cannot say we are a great team. A great team is more clinical and solid," he told Sky Sport Italy.

"We are talking about another unlucky outcome again. We have to improve our finishing, because we are struggling.

"Mistakes can happen, but we must grow and whittle down them down as much as possible."

It ends all square at EmpoliFinisce in parità al Castellani 1-1 September 27, 2018

Ex-Roma man Romagnoli apologised to the club's fans for his part in the failure to secure three points.

"I'm disappointed because I made a mistake and I take full responsibility for it," the 23-year-old said.

"Without my mistake it would have been a different game, but now we have to keep working without listening to anyone and staying united."

Milan's hopes of putting the match beyond Empoli's reach were hampered by Gonzalo Higuain's absence with a muscle problem.

The striker will be monitored ahead of a possible return away to Sassuolo on Sunday.