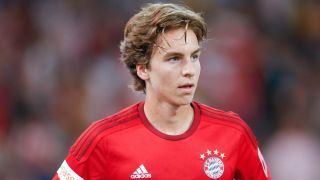 The 19-year-old came through the ranks of the Bayern youth academy and made his official first-team debut in the 2-0 German Supercup defeat at the hands of Borussia Dortmund in August 2014.

The midfielder went on to make 10 more appearances in all competitions in 2014-15, but was unable to make the next step in his development this term due to the stiff competition for places, with Xabi Alonso, Javi Martinez, Thiago Alcantara, Arturo Vidal, Joshua Kimmich, Philipp Lahm and Sebastian Rode all being preferred by head coach Pep Guardiola.

Gaudino had been plying his trade with Bayern Munich II instead in 2015-16, but will now continue his career at St. Gallen in order to gain valuable first-team experience.

The Germany Under-19 international is the third player to leave the reigning Bundesliga champions in the January transfer window, with Sinan Kurt joining Hertha Berlin and Jan Kirchhoff opting for a move to Sunderland, both on permanent deals.