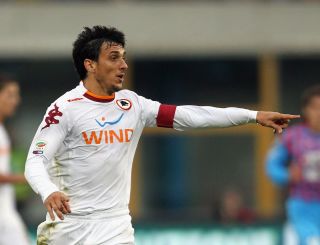 The Serie A club completed the double swoop on Thursday as they look to build on a promising start to the season that sees them 10th in the table.

Argentina defender Burdisso was looking for an exit from Roma in a bid to boost his chances of being selected for the 2014 FIFA World Cup.

The 32-year-old centre-back has made six appearances for the capital club this season and just three Serie A starts have forced him to look elsewhere.

The former Inter and Roma defender is vastly experienced in Italian football, though, and will add solidity to a Genoa side that have conceded just 24 league goals this season.

The capture of Motta will also strengthen Gian Piero Gasperini's squad, with the 27-year-old possessing significant Serie A experience as well.

Motta has joined until the end of the season and will be looking to play regularly, having made just two league appearances this campaign for the champions.

Both signings could come into Genoa's squad for their trip to Fiorentina on Sunday.