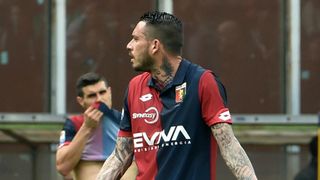 Genoa forward Mauricio Pinilla has been banned for five games after striking referee Claudio Gavillucci during his team's 5-0 Serie A defeat to Atalanta on Sunday, the league's disciplinary commission has announced.

Pinilla - who is on loan at Genoa from Atalanta - was dismissed for two bookings in quick succession on the hour with his side trailing 2-0 to goals by Andrea Conti and Alejandro Gomez at Stadio Luigi Ferraris.

The Chile international received his first yellow card for a rash challenge on Atalanta goalkeeper Etrit Berisha and subsequently remonstrated with the match official.

Gavillucci duly booked Pinilla for a second time to dismiss the attacker, who reacted angrily and had to be restrained by his team-mates before leaving the pitch.

A statement from Serie A's disciplinary body said Pinilla used insulting language against the referee, as well as showing an offensive gesture, before striking the official.

"After receiving notice of his expulsion, [Pinilla] approached the referee with a threatening and intimidating attitude, was barely restrained by teammates and opponents, striking the [referee] with slaps on his arm and on his right hand and giving him also threatening expressions," it read.

Following Pinilla's red card, Gomez added two further goals to complete his hat-trick either side of Mattia Caldara getting on the scoresheet to leave Atalanta fifth, while Genoa are 16th.