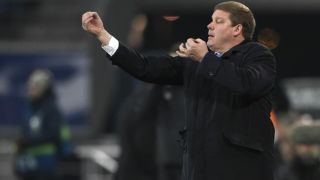 Gent believe they can pull off a Champions League "miracle" against Wolfsburg on Tuesday, head coach Hein Vanhaezebrouck has said.

The Belgian champions found themselves 3-0 down after an hour of the last-16 first-leg encounter, but late goals from Sven Kums and Kalifa Coulibaly gave them some hope of reaching the quarter-finals.

Vanhaezebrouck concedes that defeating Wolfsburg at the Volkswagen Arena, where the Germans have lost just once in their last six Champions League matches, is a tough task, but he insists his side head into the game with plenty of courage.

"We'll need a real miracle as Wolfsburg generally don't lose at home by more than two goals," he said. "In the last year that's only happened against Bayern Munich, Napoli and Everton. So it won't be easy.

"That doesn't mean we're giving up because miracles do happen. I'll prepare my players so they can play the best game they can."

Kums admits Gent paid for a largely poor display in the first leg and is determined to see his side start strongly from the first whistle in the return.

"We will try everything to achieve our dream of qualifying for the next round," he said. "In the first leg match we were asleep for the first 80 minutes and started too late. We have to improve on that.

"We just want to play a good game. This group always goes for it, we don't give up on anything."