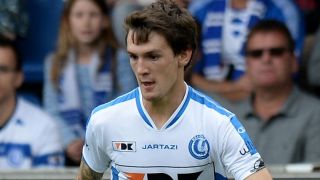 Belgian outfit Gent have suspended Benito Raman indefinitely after the striker aimed a homophobic chant at a rival club.

A number of Gent players grabbed a microphone from the crowd following the club's 3-0 win over KV Kortrijk on Sunday to celebrate with the fans.

However, Raman sparked controversy by initiating a homophobic chant directed at Club Brugge.

Gent were forced to release a statement to apologise for Raman's actions and announced the 21-year-old would be suspended indefinitely.

"KAA Gent dissociates itself entirely from the inappropriate statements of the player Benito Raman yesterday immediately after the game. Such statements are completely contrary to the fundamental values of the club," the statement read.

"KAA Gent wants to apologise, first and foremost to the gay community in general and to their own gay supporters in particular.

"Finally, KAA Gent also apologises to the supporters of Club Brugge and we hope that this incident does not compromise the good relations between the clubs."

Gent also revealed Raman may be given an additional punishment "in consultation with a gay rights organisation".

"The club has been supplying substantial effort to assist the player in question, not only in sporting but also psychological terms; it is therefore difficult to understand that he still frequently makes these mistakes," the statement continued.

"That is why the club has decided to suspend Benito Raman with immediate effect for an indefinite period.

"To assist in the further development of his career, Benito will also receive additional psychological counselling to prevent further incidents, which are a result of his youthful rashness.

"There will also be an internal conversation with the whole squad, which is aware of the reputational damage which KAA Gent has suffered.

"The squad, through captain Sven Kums, suggested an additional punishment in consultation with a gay rights organisation."

Raman offered an apology through his person Twitter account, saying: "I apologise to everyone I've hurt! @ClubBrugge My apologies!

"After the game, I said things that happen only in football! Outside I have a lot of respect for all @ClubBrugge supp(orter)s!

"I also apologise to all people of other orientations! It was absolutely not my intention (to offend you)!"

Gent are top of the Belgian Pro League and will face Wolfsburg in the last 16 of the Champions League.