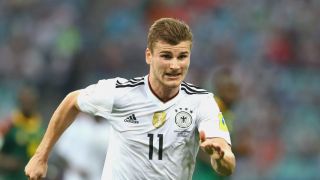 Germany full-back Joshua Kimmich has tipped team-mate Timo Werner to make a major impact at the World Cup, starting on Sunday against Mexico.

Werner has supplanted Mario Gomez as the Germans' first-choice striker and Kimmich, who has known the RB Leipzig man since he was 13, believes he has the ability to justify the faith shown in him by coach Joachim Low.

Bayern Munich star Kimmich said: "I think he showed at the Confederations Cup last year and in the matches after that how good he is.

"With his speed he is a weapon for us. I've known him since I was 13 when we played together in the youth teams at Stuttgart.

"For me he's a very important player for us and I told him that I haven't been part of a tournament where he wasn't the leading goalscorer.

"At the moment, he's very calm but let's see how he is ahead of the first match."

Werner scored the last time the teams met, in the semi-finals of last year's Confederations Cup, a game Germany won 4-1.

Kimmich warned little should be read into that result, though, and admitted Mexico were the better side despite the one-sided scoreline.

He added: "Our team has changed a lot compared to last year. Mexico has a lot of the same players still in their team.

"We had a good start in our last match [Germany led 2-0 inside eight minutes] but then they were better and we had to focus on defence.

"We had some luck with their mistakes but they were better and had more of the ball than us."

Mexico have been keeping a relatively low profile since arriving in Russia, something that cannot be said of their boisterous supporters who have been a visible presence on the streets of Moscow since the middle of the week.

Coach Juan Carlos Osorio's main headache leading into the Germany game is how to improve an impotent attack that has managed just one goal in the last four matches – Giovani dos Santos' effort against Scotland.

The country's all-time record goalscorer Javier Hernandez endured a disappointing season at West Ham and arrived in Russia without a goal in two months.

With Raul Jimenez and Oribe Peralta also failing to impress in the warm-up matches, Osorio may look to pack the midfield and try to play on the break against Low's men.

If Mexico become preoccupied with the pace of Werner, Muller will likely benefit. The wily Bayern Munich attacking midfielder won the Golden Boot at the 2010 World Cup and followed that up with another five goals as Germany won the 2014 tournament.

With Osorio pondering a change of approach, Vela could be the man to trouble the Germany defence. Vela plays on the right for Mexico but is given license to drift inside.

- Germany have won their opening game in each of the last seven World Cups, including scoring 20 goals in their last four openers (eight v Saudi Arabia in 2002, four v Costa Rica in 2006, four v Australia in 2010, four v Portugal in 2014).

- Meanwhile, Mexico are unbeaten in their last five World Cup opening games (W4 D1), their last defeat dating back to 1994 against Norway (0-1).

- Germany will be looking to become the first team to win back-to-back World Cup titles since Brazil achieved it 1962. Overall, only Brazil have lifted the trophy on more occasions (five) than Germany (four).

- Among the eight teams to have qualified for the World Cup at least 14 times, Mexico are the only one yet to win the tournament. They’ve never progressed further than the second round outside their own borders.

- Thomas Müller has scored more goals (10) and delivered more assists (6) at the World Cup than any other currently active player.