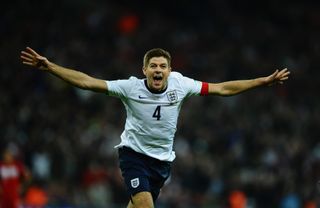 The Liverpool midfielder is two appearances away from his 109th cap for his country, which would put him third in the all-time England list, surpassing Bobby Moore in the process.

That milestone could be achieved in the next couple of weeks after the 33-year-old was named in Roy Hodgson's squad for the upcoming friendlies against Chile and Germany.

However, Anfield boss Rodgers believes that his captain is reaching a stage in his career when he might consider stepping down from national-team duties.

"I think it’s something he will assess and look at," said Rodgers. "If you go to a World Cup in Brazil at 34 years of age, you might not have many more championships left in you.

"Very few players do. I can think of (Javier) Zanetti and (Paolo) Maldini who have played on late but it’s rare."

Gerrard has played in three UEFA European Championships and two FIFA World Cups for England and was named captain in 2012.

"Steven is a real talisman for the group," Rodgers continued. "He is a real leader for the team and everyone there.

"But, for Steven, he probably looks at it as though this is his last international year and after the World Cup that will be all finished and he will have time to rest.

"He and Roy (Hodgson) have a good relationship and I’m sure if he needs a breather in these two games he will get it.

"It will be Steven’s decision, but I’m sure in these years now he’ll want to maximise every cap, every performance and every minute on the pitch he can, and that’s what he’s trying to do."

Gerrard has made 10 Premier League appearances for Liverpool this season, scoring two goals.