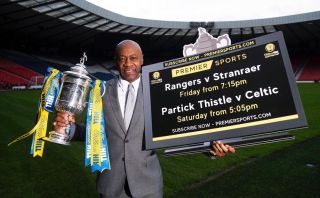 Rangers will be able to have their pick of top names from around the world when they eventually go in search for Steven Gerrard’s Ibrox successor, according to Mark Walters.

The former Gers winger reckons Gerrard has restored prestige to the Light Blues’ top job since moving to Glasgow.

It is just two years since Aberdeen boss Derek McInnes knocked back Dave King’s offer to become Rangers manager amid concerns over the situation in Govan.

Since then, Walters has watched Gerrard transform the shambles he inherited from Pedro Caixinha into genuine title contenders and is convinced there will be no shortage of candidates to take over when the former Liverpool and England skipper – whose new Rangers deal runs to 2024 – finally decides to depart.

Gerrard admitted last week it is his “dream” to one day return to Anfield as boss but for now is focused only on ending Celtic’s stranglehold on the Scottish game.

Last month’s Parkhead win leaves Rangers just two points behind leaders Celtic with a game in hand but Walters reckons it is more than their championship chances that have been enhanced under the 39-year-old.

Speaking as he promoted Premier Sport’s coverage of Friday’s Scottish Cup opener with Stranraer, he said: “There have been big, big developments under Steven. They have been steadily coming on. It’s very similar to when Graeme Souness came to Rangers.

“Obviously Graeme had a lot more money to buy players but the development and improvements have been very good.

“This is a really important time for Steven. If he can realise the mistakes they made at the last winter break then it would be a good indicator of how he is doing personally and how the team is doing. If they have improved since then – and I’m sure they have – then it’s game on, definitely.

“Football is very transitional. Managers come and go. The average manager only gets a year or two in a job so it’s inevitable Steven will leave at some stage, for whatever reason.

“But Rangers are now competing with everybody in the league. They are buying players, which wasn’t happening before.

“So they can now look to sign a manager from all over the world.

“Steven Gerrard is still learning so I don’t think it would necessarily be a good thing for him to leave just yet anyway.

“Hopefully he can stay a bit longer and fulfil his contract at least.

“The Rangers job is an attractive proposition once more. They are competing with Celtic financially. It’s a fantastic club as everyone knows with brilliant supporters and that will attract any manager in the world now.”

When Souness was lured away from Rangers in 1991 to return to Liverpool, Walters went with him.

Together, the pair contributed three league titles to the Ibrox trophy room – but Walters has warned Gerrard will most likely have to make his his own deposits to that treasure trove before he can fulfil his own Anfield ambitions.

“You’ve got to win trophies, it’s a results business,” he said. “It’s been very close of late and losing the Beftred Cup final was a massive blow – but they seem to have improved again since that.

“At the end of the day it’s about winning trophies.

“Touch wood, Rangers win the league this year and that will be a big indicator that things are going well.

“I wouldn’t call managing Rangers an apprenticeship as it’s one of the biggest clubs in the world but Steven can only learn from being up here, knowing the expectations are similar at Liverpool.

“Winning is all that matters and second is nowhere really, so being at Glasgow Rangers will help his managerial career wherever he goes.”