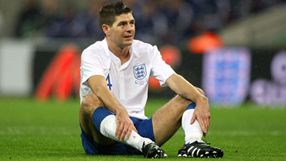 "Steven injured his hamstring last night. He's just been in for an early assessment here and it certainly looks like a significant hamstring injury," doctor Peter Brukner told Liverpoolfc.tv.

"He's going to be out for a little while, I'm afraid. I'd imagine it could be three to four weeks."

Gerrard, who is having a scan later on Thursday but has already been ruled out for three to four weeks in an early assessment, limped off after 85 minutes of England's 2-1 friendly defeat to France at Wembley Stadium on Wednesday.

England manager Fabio Capello came under heavy fire later on after the defeat via a Twitter outburst from Liverpool fitness coach Darren Burgess who called the manager's decision to keep Gerrard on after an hour "amateurish".

Burgess posted on the social networking site: "Completely ignored agreement and past history. Completely amateurish and now we pay for their incompetence. Absolutely disgraceful."

His comments were on the site for 55 minutes before being deleted.

Capello had said Gerrard would only play for an hour but after injuries in the match to Rio Ferdinand and Gareth Barry, the Italian decided to keep him on until he too was injured.

Brukner told Liverpoolfc.tv that it is something the club must accept: "If you put your hand up to play for your country, you've got to accept how long they want you to play for."

"There were obviously circumstances last night which came together to result in Steven playing for a bit longer than we'd hoped, which is disappointing but there's nothing we can do about that now."

The news comes amid a dismal season for Roy Hodgson's Liverpool sit in 11th place after 13 games, 12 points behind leaders Chelsea.