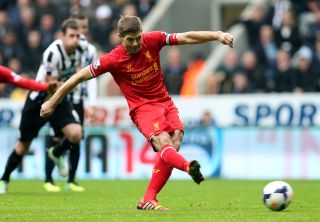 The former Manchester United manager made the comments in his autobiography, but Liverpool midfielder Gerrard refuses to let it bother him and has claimed the Scot even tried to take him to Old Trafford on more than one occasion.

"Listen, he’s entitled to his opinion," the midfielder told the Daily Mail. "I’m a fan of his; he is one of the best managers in the world.

"I won’t lose any sleep over it. Throughout my career I have had praise from all types of people - including him - and I am not vain enough to take it all.

"I have had some unbelievable praise from him and he tried to buy me, certainly on one occasion. Maybe even two.

"For me, the most important thing is what (Liverpool manager) Brendan Rodgers and (England manager) Roy Hodgson are thinking. I think they are really pleased with me and that is all I will worry about."

Gerrard, who is two appearances away from overtaking Bobby Moore in becoming his country's third most-capped player, admits his international focus is not on securing as many caps as possible, but leading England to success in a major tournament.

He continued: "107 caps isn’t bad for someone who isn’t "a top, top player", is it? I never expected to get that amount of caps.

"When I made my debut, I set myself the personal target of trying to get 50 caps and score 10 goals if I could, so to have 107 is something I am really proud of, particularly being among those names.

"But the dream would be to come away from a tournament and everyone back home is proud of the team.

"For me the ambition is this: can I help get the team past a quarter-final?"

Despite intimations by Anfield boss Rodgers that Gerrard may quit the England set-up after the 2014 FIFA World Cup, Gerrard says he is as yet undecided on his international future.

"I haven’t really thought about what I will do after the World Cup," he added. "It is all about going to enjoy this World Cup. What an experience it will be in Brazil."