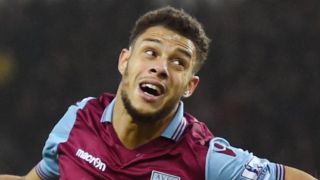 Rudy Gestede conceded Aston Villa must string together wins to have a chance of Premier League survival after he ensured a share of the spoils against Leicester City.

Gestede came off the bench to score after 75 minutes, amid suspicions of handball, to seal a 1-1 draw for the Premier League's bottom side against the surprise league leaders at Villa Park.

Remi Garde's side, who won for the first time since the opening day of the season against Crystal Palace in midweek, turned in a much improved performance after a first half when Leicester deservedly led through Shinji Okazaki's 28th-minute goal and Riyad Mahrez had a penalty saved five minutes later.

"We are a bit disappointed - we know we have to win games now in the situation we are in, but we take the one point. It's still okay," former Blackburn Rovers striker Gestede told Sky Sports following a result that leaves Villa nine points from safety.

"I think it keeps the momentum going, Leicester are a good team, they are doing very well this season.

"It is still good momentum for us but the next one is going to be important - we have to win.

"We have to keep this confidence. It will be tough but we have no choice but to fight."

Leicester boss Claudio Ranieri felt Gestede's strike should have been disallowed after the ball struck his hand as he bundled past Robert Huth and unleashed a shot that deflected home off the sliding Wes Morgan.

On the incident, Gestede said: "I didn't feel it - I don't know if it was a handball or not but it is a goal."