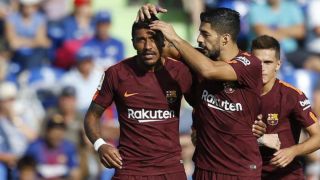 Substitute Paulinho scored a late winner as Barcelona came from behind to beat Getafe 2-1 and continue their perfect start to the new LaLiga season.

The Brazil international netted his first Barca goal with six minutes remaining as Ernesto Valverde's men recovered from a dreadful first half to claim a fourth straight top-flight victory in 2017-18.

The visitors lost Ousmane Dembele to injury in the opening period of his full Liga debut and their Saturday afternoon got worse when Japan international Gaku Shibasaki scored his first Getafe goal in stunning fashion before the break.

But another of Valverde's subs, Denis Suarez, struck for the first time since January as the visitors battled back in the second half, before Paulinho grabbed the winner just as it looked like they would have to settle for a draw.

Leaders Barca now have 12 points from their first four games and sit seven clear of reigning champions Real Madrid, whose game in hand is a testing away trip to in-form Real Sociedad on Sunday.

Getafe remain on four points and have now gone 10 LaLiga matches without a home win, despite a brave performance.

The hosts made a bright start, forcing Gerard Pique into a rugby tackle on Jorge Molina to thwart an early attack, earning the defender a booking, although the resulting free-kick was wasted.

Getafe were inches away from moving in front when a neat passing move ended with Shibasaki's cross from the left being put into the side netting by a stretching Molina only a yard out, with a vital deflection from Pique as the pass was making its way to the striker doing just enough to put him off.

Barca lost Dembele to a hamstring injury midway through the first half after he had attempted a back-heel near the corner flag, Gerard Deulofeu coming on.

Ousmane Dembélé has a hamstring injury in his left leg, more tests are needed to find out the extent of the injury September 16, 2017

Somewhat against the run of play, Barca should have moved ahead when Samuel Umtiti could only send a close-range free header straight at Vicente Guaita from Andres Iniesta's in-swinging cross.

But it was Getafe who took a shock 39th-minute lead at the other end, with Damian Suarez's deep cross brilliantly chested back by Markel Bergara, allowing Shibasaki to unleash a magnificent 20-yard volley past Marc-Andre ter Stegen, who was making his 100th Barca appearance.

Lionel Messi had a quiet first half until he sent a brilliant 30-yard free-kick towards goal in stoppage time, only for Guaita, at full stretch, to push it on to the crossbar as Getafe went into the break ahead.

Getafe hero Shibasaki had to leave the match with an injury of his own early in the second half, shortly before Sergi Roberto tested Guaita.

The equaliser then came on 62 minutes as Barca regained possession down the right, allowing Roberto to cut back for Denis Suarez, who had replaced Iniesta at the break, to take a touch and send an impressive finish into the top corner from 12 yards.

Luis Suarez had a penalty claim turned down after tangling with Djene Dakonam in the box, ultimately earning himself a booking after continuous dissent.

Valverde introduced Paulinho in his final change, but it was Getafe who almost grabbed a shock winner when Mauro Arambarri's deflected effort bounced off the foot of the post.

However, despite being off-colour for much of the game, Barca were not to be denied a winner.

Paulinho – just seven minutes after coming on – collected a Messi pass and showed strength to fend off two home defenders as he charged into the box before firing a fine finish into the far corner, ensuring his side's fine start to the campaign continued.