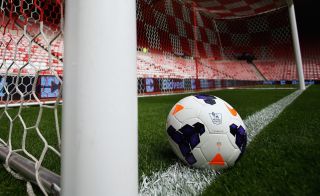 The clash on November 19 is scheduled to take place in Cairo, but the Ghanaian FA have raised concerns over the safety of playing the match in Egypt's capital.

Spectators have been banned from football stadiums in the city since February 2012 when more than 70 fans died during clashes between rival supporters, while two league seasons have been cancelled.

Al Ahly and Zamalek have been forced to move their CAF Champions League clashes away from Cairo in recent months due to safety concerns in the North African country.

The Ghana Football Association outlined their concerns to the world governing body in a letter published on their official website.

It read: "The Ghana Football Association (GFA) wishes to kindly request FIFA to move the venue for the 2014 World Cup Qualifying second-leg, play-off between Egypt and Ghana on 19th November, 2013 from Egypt to a safe and secure venue.

"Our request is premised on the alarming and fast deteriorating security situation in Egypt.

"The GFA is gravely concerned that for the past two years Egyptian authorities have only allowed football matches to be played without spectators yet Ghana has reportedly been asked to play Egypt in Cairo before fans.

"It is noteworthy that Egypt played all their home qualifying matches for the 2014 World Cup with Mozambique, Zimbabwe and Guinea in Egypt without spectators.

"Local clubs Al Ahly and Zamalek played their recent CAF Champions League matches behind closed doors as the security authorities refused the supporters access to the games because of the current turmoil in Egypt.

"Much as we sympathize with our brothers at the Egyptian Football Association, we are highly concerned about the security and safety of our players, officials and supporters and would like FIFA to take the necessary steps to protect lives from both Ghana and Egypt during the second-leg game."

The GFA have requested the game be played at a neutral venue, yet their Egyptian counterparts have insisted there is no reason for concern.

"The second leg match will be held in Cairo on November 19 and this is final. The security authorities will provide heavy security for the game," EFA spokesman Azmy Megahed told Ahram Online.

"These claims are unfounded and we reject all demands to play the game outside Egypt.

"We are capable of securing any game, not just the Ghana one. Ahly and Zamalek have been playing their games in the African Champions League in Egypt without any problems."

The nations play the first leg of their play-off on October 15 in Kumasi as they look to secure a place at Brazil 2014.