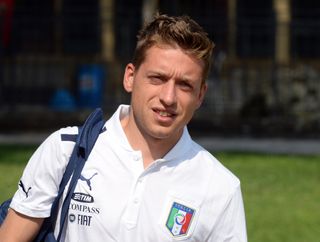 He has adjusted well to life in the English top flight, netting two goals in his opening six appearances, although Sunderland are yet to register a league win this term.

Giaccherini, who has seen Paolo Di Canio depart the Stadium of Light to be replaced by Gus Poyet, has no regrets over his move but admitted that it could have turned out differently if Conte had got his way.

"I've lived two unforgettable years in Turin and if the decision was up to the coach, I'd have remained at Juventus," he told Radio Mana Sport.

"The club evaluated all the offers that arrived and accepted Sunderland's one. They preferred to let me leave.

"In the Premier League, the football is less technical but much more intense and aggressive.

"Stadiums are always full and the supporters have been absolutely fantastic."

The midfielder is currently with the Italy squad, who will finish their FIFA World Cup qualifying campaign with matches against Denmark and Armenia, having already won their group.