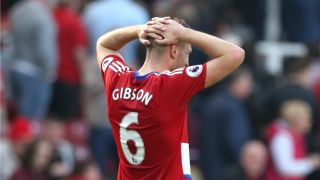 Ben Gibson has hinted he would be open to leaving Middlesbrough at the end of the season as he wants to stay in the Premier League.

Boro's relegation from the top flight was confirmed after a 3-0 defeat at champions Chelsea on May 8 and they have taken just 28 points from their 37 league games.

Captain Gibson described relegation as the lowest moment of his life and the defender - who was called up by England for the first time in March - suggested he could move on from Middlesbrough.

"I'm obviously contracted to the football club," Gibson told Sky Sports. "It's been a hard year for everyone.

"What I would say is that since I came here at 10 years old, I've given my lot for the football club.

"I think every player in the world wants to play in the Premier League, everyone wants to play at the top level. I'm no different to that. What I would say is that no decision has been made regarding my future as of yet."

Gibson has been linked with clubs including Chelsea and Liverpool after helping Boro to record 11 league clean sheets and the 24-year-old believes he has shown he has the talent to play in the Premier League despite relegation.

"I feel like I've done well personally," Gibson added. "I pride myself on our team keeping clean sheets and trying to lead a back line, being in control of it and then trying to play out from the back, helping the team going forward when I can.

"We feel we have done that well, but trying to be a perfectionist, which I am, there are times we should have kept more clean sheets. Particularly lately we have conceded more goals than we should have.

"I think personally I've been encouraged by my performances. Until you step foot over the white line in a new division, you don't know if you can play at that level. I believe in myself that I'm capable of playing at this level and I've enjoyed testing myself against what are some of the best players in the world."