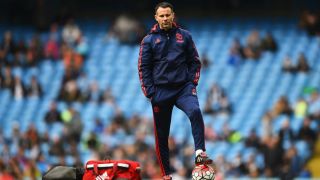 Ryan Giggs has become synonymous with Manchester United, but a quiet exit via the backdoor after the most glorious of playing careers is as much a consequence of his own pride and ambition as it is Jose Mourinho's unwillingness to compromise.

Now, he faces a long and uncertain road back to the Old Trafford limelight.

Perhaps the greatest of United's many outstanding modern players, Giggs' legend at his only senior club was forged in the trail of right-backs he left with, as Alex Ferguson put it, "twisted blood", as well as the 13 Premier League, two Champions League and four FA Cup titles he helped to raise aloft.

It hardly seems fitting that Giggs' illustrious time at United ended without ceremony, but it soon became evident he had loftier ambitions than he would have been afforded by Mourinho.

The former Wales international spent time in Dubai and did not rush when contemplating his next move. Ultimately, he was frustrated not to land the top job himself, which would almost certainly have gone his way had Louis van Gaal been a success and remained for the duration of his original three-year contract.

Giggs' refusal to be anything less than the assistant manager to Mourinho perhaps made his United exit inevitable after The Special One landed the top job.

Something of a sentimental appointment as player-coach to David Moyes, the 42-year-old faced a tougher challenge to earn pride of place among Mourinho's backroom staff.

It was even something of a surprise that he served as assistant manager under Louis van Gaal, despite doing a decent enough job as caretaker for four games after Moyes' sacking in 2014.

Mourinho understands the value of having someone with close links to the club among his advisors, Steve Clarke and Zinedine Zidane having met that requirement at Chelsea and Real Madrid respectively, although the latter may have had more to do with the whims of president Florentino Perez.

But equally, Mourinho might have been reluctant to give similar prominence to someone so closely tied to Ferguson and his two failed successors.

And there was little prospect of the Portuguese leaning chiefly on Giggs ahead of his trusted long-term deputy Rui Faria.

The romantics among the United faithful will still pine for the former winger to one day occupy the managerial hot seat at the club, but in leaving rather than prolonging his waiting game in a reduced capacity, the club's all-time leading appearance maker has passed up a golden opportunity to be promoted from within.

Pep Guardiola may have been head coach at Barcelona within two years of ending his playing career, but Zidane – and others like him – had to wait for a decade.

Wherever he ends up as manager, Giggs will have to prove himself in the unforgiving public eye, without the benefit of the doubt afforded to him at Old Trafford courtesy of his past achievements.

The list of United greats previously touted to succeed Ferguson is long and inglorious. Steve Bruce and Mark Hughes continue to manage at a high level, but only the latter has any genuine claim - and an unconvincing one at that - to one day taking over at the Theatre of Dreams, especially given he spent 18 months as manager of cross-city rivals Manchester City.

Roy Keane, Paul Ince, Bryan Robson and Ole Gunnar Solskjaer were all once touted for the job before their shortcomings became apparent.

One of the most recent favourites to have graduated under Ferguson was Gary Neville, the former television pundit badly undermining his claim through a disastrous spell in charge at Valencia and his association with Roy Hodgson's England regime.

As they have proved, having walked away, the road back to Old Trafford is arduous, leading invariably to dead ends, broken dreams or the compromise of forging a path elsewhere, never doing enough to get back to the promise land.

Giggs, having dispensed with the safety net of remaining in-house, must succeed where dozens of his fellow former Red Devils have failed, by proving himself worthy of one football's biggest jobs.