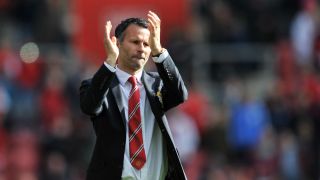 Ryan Giggs will not rush into taking a managerial position and is happy to wait for the right opportunity.

Giggs ended his 29-year association with Manchester United last month and has been linked with a series of vacancies, most recently Hull City following the departure of Steve Bruce.

But the 42-year-old, who is currently playing in the Indian Premier Futsal League, is happy to bide his time before taking on a top job.

He told reporters: "Obviously, I want to be a manager. Ever since I left school, I've been at United so this is the first time in 25-26 years where I have gone into a pre-season not going to work.

"I have been keeping myself busy coming here and doing some media work and I am quite happy and relaxed.

"It is similar to when I finished playing, there was a disappointment but also I was relieved on my body for what I had done for 25 years. So, there is a little bit of relief so I can step back and if the right offer comes, I will jump on it. I am not in any rush, but at the same time I don't want to leave it too long."

Asked if he had any offers on the table at the moment, he added: "No. I've just been enjoying myself. I did a bit of media work during the Euros and now have come here to be in the Premier Futsal."

He did admit, though, to having had offers previously.

"Yeah, I have had [offers] but little bits really," he said.

"I didn't know that I was leaving United and it is a short window and most clubs have got their managers more or less and they want to work with them pre-season. Unfortunately, managerial jobs can be very short, who knows what happens in the next four or five months."

Giggs managed Manchester United on a caretaker basis following the sacking of David Moyes in April 2014, an experience he believes will stand him in good stead.

"It was an unbelievable experience even only for four games," he said.

"I had done all my coaching qualifications but there is nothing like sitting on the hot seat. It was two and half weeks but I learnt so much. You can do all your coaching badges but once you're in there, you're on your own. You're in your office, you've got to pick the teams, prepare training, watch opposition, so many things going on. I know that experience is going to help me forever in my managerial career."