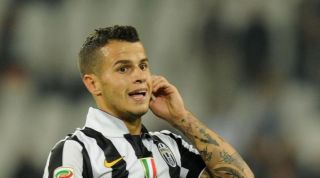 Giovinco's current deal expires at the end of the season and he is yet to be offered extended terms with Arsenal recently credited with an interest in the diminutive forward.

Since making his Juve debut in May 2007, Giovinco has made 123 appearances for the Turin club, though his finest spell arguably came while on a two-season loan at Parma from 2010-12.

And his representative, Andrea D'Amico is baffled by an apparent willingness from Juve chiefs to lose Giovinco on the cheap in January - or for nothing in June.

D'Amico told SportItalia: "I don't understand how [CEO Beppe] Marotta and Juve could decide to lose a fantastic player who is just 27 years old like Giovinco for zero euros.

"They paid all those millions, and he has always demonstrated his great class whenever played."

Giovinco himself was also quizzed on his future after featuring as a substitute in Italy's last-gasp 2-1 win over Azerbaijan on Friday.

Though happy to remain at Juventus Stadium, Giovinco hinted he would be happy to look elsewhere in the search of regular action.

He told Rai Sport: "I have not resigned myself to always be a substitute, I have much to evaluate.

"I will always give my all and at the end of the season we will look at what to do and whether I will continue with Juve - I hope to."