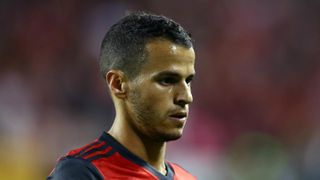 Sebastian Giovinco criticised Toronto for an "unacceptable" contract offer and insists he did not join Saudi Arabian side Al-Hilal for financial reasons.

The Italy international hit 83 goals and provided 64 assists in 142 games in all competitions for Toronto, whose president Bill Manning described the forward as the club's greatest ever player on his departure.

But Giovinco, who joined Toronto from Juventus in 2015, has used social media to explosively hit out at the club following his exit.

"They may say I left for a more lucrative deal, but this is not the case," the 2015 MLS MVP wrote on Instagram.

"Their offer and lack of transparency is a clear message. It seems management prefers to focus on things other than the pure desire to win.

"After having grown the brand and elevating the overall reputation of TFC both at home and abroad, it seems I no longer serve a purpose. I would have accepted less to stay in Toronto."

Giovinco claims he was forced out of the club despite making clear his desire to extend his stay.

"As I have always maintained, I was hoping to renew my contract and finish my playing career in a city that feels like home," he said in the post.

"It is here where my daughter was born and where my son took his first steps on a football pitch. A place my family loves to live and wanted to call home for good.

"Unfortunately, this desire of ours has clashed with a change in direction with current TFC management. For the two years I have been seeking to extend my contract however management was reluctant.

"Recently, after refusing to exercise the club option for 2020, I was offered terms that I deemed unacceptable."