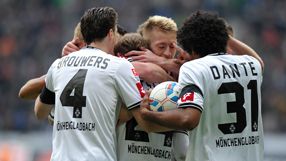 Solbakken was fired on Thursday, two days after a 4-0 hammering at Mainz 05, but it made little difference as Juan Arango, Tony Jantschke and Marco Reus scored to push Cologne closer towards the second division.

Cologne are in 16th place, the relegation play-off spot, and sit four points adrift of Augsburg in 15th with three matches left. The Billy Goats have lost five of their last six games, conceding 20 goals along the way.

"It was not all bad," said Cologne goalkeeper Michael Rensing, who avoided an even heavier defeat with half a dozen excellent saves. "But when they scored the second goal, we were out of the running."

Fourth-placed Gladbach, who flirted with relegation themselves last year, boosted their chances of claiming an automatic place in the Champions League next season by moving within one point of third-placed Schalke 04.

Fourth place would earn them a place in the Champions League qualifying rounds.

"Anything is possible, we deserved the win," said Gladbach's Swiss coach Lucien Favre who has led Gladbach's astoninshing change of fortunes this season. "It was not easy. I don't know what would have happened in Cologne had scored first."

Schaefer, who stepped down as Cologne coach a year ago, barely had time to get comfortable before Venezuela forward Arango curled a free-kick over the wall and into the top corner after 19 minutes.

Cologne have the worst defensive record in the Bundesliga and more calamitous defending left Mike Hanke with a clear chance in the 32nd minute but he shot straight at Michael Rensing.

There was no letoff in the 53rd minute when Reus floated a free-kick into the area and Jantschke beat his marker to the ball to head in his first Bundesliga goal since December 2008.

Two minutes later, Reus collected the ball on the edge of the penalty area, slipped the ball through the legs of one defender, repeated the trick with another and placed his shot wide of Rensing for the third - the 66th goal Cologne have conceded in the league this season.

Freiburg and Hoffenheim played out a mid-table goalless draw in Sunday's other game.