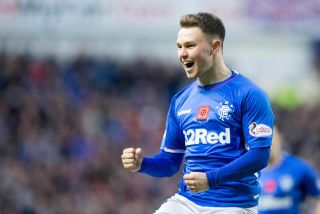 Glenn Middleton revealed it took just one phone call from Hibernian head coach Paul Heckingbottom to convince him to move to Easter Road on loan.

The Scotland Under-21 international scored five goals in 27 appearances for Rangers last season but fell down the pecking order following the arrival of the likes of Jordan Jones, Sheyi Ojo and Jake Hastie.

He had offers from clubs in the UK and Holland but soon decided Hibs were the best option for him to continue his football development, signing a season-long deal.

The 19-year-old told Hibs TV: “The way the manager spoke to me on the phone and the things he was saying about the club, I was pretty much set in my mind during that phone call that I’d really like to come and play for this team this season.

“When you get an opportunity to play for this sort of club and the stature of the league, you can’t really turn it down.”

Middleton added: “I’m very hungry. I’ve got a big desire to succeed with my career and do well and hopefully this season I can really kick-start things again.

“I can’t wait to get out there and show people what I’m about.”

Heckingbottom was delighted with Middleton’s attitude and decision.

“I think our supporters will enjoy watching Glenn play,” he said. “He’s direct, quick and will add different qualities to the squad.

“From our conversations he’s clearly desperate to play for this club.”