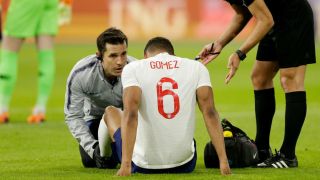 Liverpool and England defender Joe Gomez is "gutted" after he was forced to have ankle surgery that not only ends his season at club level, but also rules him out of the World Cup.

The 20-year-old has featured 23 times in the Premier League this term, becoming a dependable option for manager Jurgen Klopp.

Gomez has featured prominently at centre-back and right-back, with his performances earning him recognition with Gareth Southgate's senior England squad.

But it was during an England friendly against Netherlands in March that Gomez sustained the injury, which has failed to heal properly.

He had been considered a genuine option ahead of England's World Cup campaign, but his need for surgery means an appearance in Russia will not be possible, while he will also be absent for Liverpool's Champions League final clash with Real Madrid.

And the youngster is bitterly disappointed after a "tough few weeks".

He wrote on his official Instagram account: "Gutted to confirm that my season for both club and country is over having undergone successful ankle surgery.

"Been a tough few weeks trying everything possible to be available on the pitch to help the team.

"I'm going to do all I can to get back and be in the best possible shape for pre-season. The focus now is to support the team in the two biggest games of the season.

"Thank you for all the support over the course of the season."