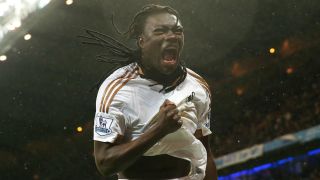 Ligue 1 side Marseille have been strongly linked with a move for the 30-year-old, with Swansea set to sanction the departure of a third striker ahead of the new Premier League season.

Francesco Guidolin's side have already allowed Eder – who scored the winning goal in the Euro 2016 final – to join Lille and Alberto Paloschi has signed for Atalanta.

"Something could well be on the horizon," Curtis said to BBC Sport about Gomis.

"He is still contracted to us but you would assume something within the next few days, or weeks certainly, something would happen with Bafe leaving the club."

Gomis joined Swansea from Lyon in June 2014 and scored a total of 13 goals across his two Premier League seasons.

An exit for the former France international, who is sitting out Swansea's tour of the United States, would leave the club without a recognised number nine in their first-team squad.

Leicester City striker Leonardo Ulloa has been linked to the club, as well as free agent Hal Robson-Kanu after he starred for Wales at Euro 2016. Liverpool midfielder Joe Allen is also a reported target.