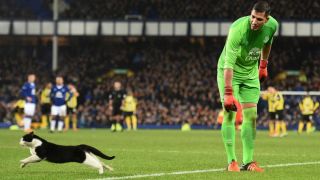 Roberto Martinez has tipped the cat that interrupted Everton's 2-0 FA Cup third-round win over Dagenham and Redbridge to achieve the same level of stardom as Cecil the lion.

Everton coasted into round four thanks to Arouna Kone's first-half strike and Kevin Mirallas' late penalty, and it would have been more had visiting goalkeeper Mark Cousins not clawed several efforts to safety.

However, it was the black-and-white intruder, who brought a temporary pause to proceedings at Goodison Park, that really left Martinez purring.

"I thought he had great style and movement," Martinez quipped after the game.

"I don't want to put any pressure on him, but he reminds me of Cecil the lion."

Cecil - previously a star attraction at Hwange National Park in Zimbabwe - hit headlines across the world in 2015 when he was killed by US dentist Walter Palmer.