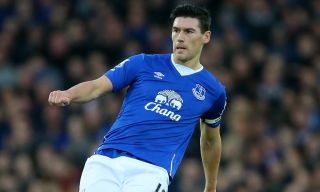 Gareth Barry has urged his Everton team-mates to make the most of their home-ground advantage for the remainder of the season as the club look to push on and win silverware.

Everton have failed to win their past four games at home, having drawn with Crystal Palace and Tottenham and lost to Leicester City and Stoke City.

"I have experienced the atmosphere [at Goodison] as an opposition player and, for me, Goodison is the toughest away ground to come to," Barry said.

"At the minute we are not using that to our advantage for some reason. That is what we need to set up on Wednesday.

"If you are an opposition player and you want to take a touch but the crowd is on your back, it is a difficult place to play.

"Under the lights here, the atmosphere is that much stronger. We need to use that to our advantage.

Barry, who will take on his former club Manchester City when they visit Goodison Park in the first leg of the League Cup semi-final on Wednesday, said the players are all aware of the importance of getting the club back among the trophies.

"This club is waiting to make the step to Wembley. The players are aware of that. I am," said Barry.

"They are similar fans. We never seem to make things easy for ourselves at Everton and at City it was the same.

"Manchester City are just another team that need to be beaten and standing in our way of achieving the ambition of lifting a trophy for Everton. The last two years of my career at Everton, I want to win a trophy. I managed to do it at City, being part of a group that ended a long wait for a trophy, and to do it here would be fantastic.

"We have got belief. We have shown this season in some of our performances that we can beat anyone. We have got some young players but there is a lot of experience too that can see us through. It all comes down to belief and we believe we can get to the final this time."