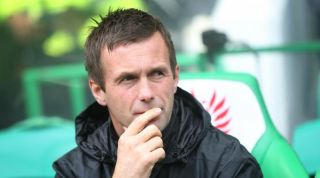 The Scottish champions were indebted to Gordon after their victory, with the shot-stopper continually keeping Dinamo at bay.

Gordon did not play a competitive match in over two years due to a knee problem before the Scotland international returned in August and Delia was delighted with his latest performance.

"Some of his saves were fantastic," Deila said.

"The one-on-one between him and Eduardo was unbelievable and he made many vital saves.

"I said to him in the dressing room afterwards that we have to thank him for keeping the clean sheet and helping us win the game."

Deila was pleased with his team's effort but acknowledged they needed to improve on the ball throughout the remainder of the campaign.

"It was fantastic team spirit and we worked really hard and defended fantastically," he added.

"They didn't get a lot of chances even though they had the ball a lot so I'm pleased with that.

"We have to take the team spirit and the fighting we did together with us, but also we need better passing and have to keep the ball for longer periods."