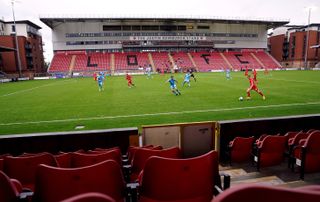 The Government and the Premier League have been urged to stop the “Punch and Judy act” and work together on an EFL bailout.

Portsmouth chief executive Mark Catlin and Leyton Orient chairman Nigel Travis are united in the view that the Government should not leave it to the Premier League to single-handedly save clubs in the three divisions below amid the financial catastrophe caused by the coronavirus pandemic.

“The Premier League and the Government need to stop acting in a Punch and Judy fashion with each other over helping out clubs in the lower tiers,” Catlin told the PA news agency.

“They need to work together. Do I think the Premier League should be a part of this (rescue package)? One hundred per cent yes. But do I think the Government should get off scot-free? No.”

Travis added: “The Government needs to step up and help. I think for them to push it on to the Premier League, who by the numbers I’ve read in the press have lost £700million, is totally unfair.

“I come back to the Government, they need to help us in our time of need because they are responsible for the situation we have.”

Sports minister Nigel Huddleston said last week that he expected the Premier League to be the ones to provide financial assistance to the EFL.

Cardiff chairman Mehmet Dalman said earlier this week he was “appalled” at Premier League clubs spending over £1billion in the summer transfer window, but both Catlin and Travis had no issue with it.

“(The Government) lay the blame at the Premier League for their spending on transfer fees and salaries, and say, ‘You’ve got all that swimming around, why are you not passing that money down?’” Catlin said.

“But the reality is it gets passed down anyway – it’s the ecosystem of football.

“If a player gets sold for £50million there is shock horror in the media – but what they don’t realise is that money then trickles down through the pyramid.

“The club that receives the £50m goes and spends £40m on three or four other players, they go and spend more money that gets spent down through the leagues, there are sell-ons, add-ons.

“It’s pretty rich from the Government when all the time they’re taking money off of it via VAT payments at 20 per cent.”

The EFL joined forces with the Premier League and the Football Association on Tuesday to issue a joint call for “clarity” from the Government over the return of fans to grounds.

They had been set to return on a socially-distanced basis from October 1, but the Government scrapped the plans amid rising coronavirus infection rates nationwide.

Travis said he is one of the signatories to a petition urging the Government to allow fans back in. It has now passed 100,000 signatures, meaning it must be debated in parliament.

Football is more than a sport; it's a cornerstone of society and a vehicle for change.— Leyton Orient (@leytonorientfc) October 7, 2020

His club budgeted for an additional loss of £1.5million this season, even on the basis of reduced numbers returning from the start of this month, while Catlin said Portsmouth had lost £700,000 a month in each of the last seven months.

Catlin added: “All we’ve asked for is to get supporters back into grounds safely and securely. We believe we can do it, it’s happening in other industries, why is there a block on football?

“We’re not even there with a begging bowl asking for help financially, we’re just asking to allow our supporters back into grounds.

“At the moment there’s just a blunt tool – supporters are not allowed in. I go back to the inconsistencies – why is it safe to allow crowds at non-league grounds?

“There’s enough uncertainty around at the moment without our own Government adding to it.”