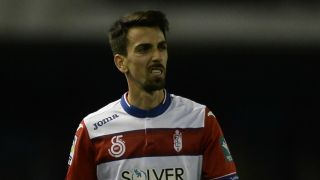 Granada attacker Isaac Cuenca is keen to end Barcelona's La Liga title hopes when he takes on his former team on Saturday.

The 25-year-old came through the ranks of the Barca youth academy, but eventually left the Catalans on a permanent basis in July 2014.

Cuenca has since worn the jerseys of Deportivo La Coruna and Bursaspor before joining Granada in February, and he is desperate to play a role in the title race.

Luis Enrique's men sit atop of the table heading into their final league game of the season, holding a one-point lead over arch-rivals Real Madrid.

A win over Granada would guarantee their 24th La Liga title in history, but Cuenca hopes to avoid a title party at Los Carmenes.

"To score the winning goal in the last minute would be perfect, it would be amazing," Cuenca told Sport.

"I don't think my Catalan friends, when I go home, would hold it against me. I play for Granada and I'm sure a lot of them would be happy for me.

"It is not easy to triumph there. I was hindered by a lot of injuries, then loans. At clubs like Barca there is not the same patience as there is at smaller clubs.

"Granada will give a good image of themselves on Saturday and we will make things really difficult for Barca."

Granada will draw confidence from their recent home form, remaining unbeaten in their last six league games at Los Carmenes (winning three, drawing three), but their head to head against Barcelona gives little reason for optimism.

They have lost 15 of their last 17 league games against the Catalans and have won just one of their last eight league meetings (drawing one, losing six), a 1-0 triumph in April 2014.

Barcelona will thus be optimistic about their chances of retaining their Liga title and Luis Suarez has urged his team-mates to remain calm if things do not go their way right from the start.

"We have to be very strong mentally and we have to realise we have 90 minutes to win the game," Suarez said at a media conference.

"We have already won a lot of games this season and we also know how to suffer in away games.

"We went unbeaten for a lot of games and then all of a sudden lost a number of games, but we have shown that we are still the same team."

Barcelona beat Granada 4-0 at Camp Nou back in January, with Lionel Messi netting a hat-trick and Neymar scoring once.

- Luis Suarez has scored 11 goals in his last four league appearances, from just 14 shots on target.
- Youssef El-Arabi, Granada's top goalscorer in La Liga history (44 goals), has netted more goals in 2015-16 than in any other previous top-flight season (16).
- Barcelona have won their last four league games without conceding, scoring an average of 5.25 goals per game in the process.
- Lionel Messi has scored in five of his eight league games against Granada, with hat-tricks in two of them (11 goals in total).
- Should Barcelona win this game, they would claim the title with 91 points, fewer than in the last four league seasons where they have won the title (99, 96, 100 and 94).