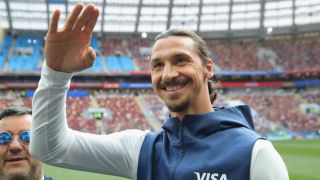 Zlatan Ibrahimovic's retirement from international football prompted Sweden to build a fierce collective spirit that has them a game away from the World Cup quarter-finals, according to captain Andreas Granqvist.

Ibrahimovic retired from international football after Sweden bowed out at the group stage of Euro 2016 and speculation over a possible return for Russia 2018 was never given credence by head coach Janne Andersson.

In the former Paris Saint-Germain and Manchester United star's absence, centre-back Granqvist has proved an unlikely goalscoring hero – dispatching penalties in the wins over South Korea and Mexico to set up a last-16 encounter against Switzerland in St Petersburg on Tuesday.

"Nothing in particular has changed, other than we've lost one of the world's best football players," the 33-year-old told a pre-match news conference at Krestovsky Stadium.

"Ever since Janne took over we've built and laid a new foundation. For the past two years throughout the qualifiers we fought for each other, we've shown that very clearly.

"As a team we know that when we do that we can be very strong and get good results.

"Others have been allowed to take a step forward when we lost, as I said, one of the world's greatest football players.

"We've done a good job and you can see this now when we're in the last 16 of the World Cup."

lost "one of the world's best football players" when Zlatan Ibrahimovic retired, according to Andreas Granqvist.But the captain hailed his team team's fighting spirit since their star man left the stageJuly 2, 2018

To continue one of the tournament's more unlikely themes, Granqvist has remained with the Sweden squad despite the fact his wife Sophie is due to give birth to their second child on the day of the Switzerland game.

One of Granqvist's potential opponents in St Petersburg, Switzerland forward Breel Embolo, flew home for the arrival of his newborn daughter after last week's final group game against Costa Rica, while England midfielder Fabian Delph is on leave from Gareth Southgate's squad for the birth of his third child.

"My wife is doing great, no changes so far," Granqvist added.

"We'll have to wait and see what happens. I'm fully focused on the game and my wife is very strong."