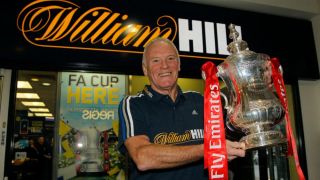 Teenage midfielder Cook and 22-year-old right-sided player Byram have reportedly attracted the attention of top-flight clubs with their performances in the Championship.

Evans also confirmed that clubs are courting Byram, who will be out of contract at the end of the season having rejected a new deal.

Irrespective of where they are at the end of January, Gray told Omnisport that both players have a future in the upper echelons of English football.

Gray, who was speaking on behalf of williamhill.com - official partner of the FA Cup, said: "Lewis Cook can be a terrific player. There are still things he's got to add to his game, like any young player.

"Massimo Cellino says he's not for sale, there's a few clubs interested in him – I think that's a good thing for the football club because you don't want to keep producing players and letting them go.

"If you look back over recent years, Leeds have a history of producing players who are capable of playing in the Premier League – Jonny Howson, Robert Snodgrass, Max Gradel and Luciano Becchio."

On Byram he added: "I think Sam Byram has the ability, if he goes, to play at the highest level.

"I'd be very disappointed in Sam Byram, Lewis Cook or any player at Leeds United if they didn't want to play at the highest level. That would show a lack of ambition."

Having extended Liam Bridcutt's loan from Sunderland until the end of the season, Leeds have been linked with a host of other Premier League names since the transfer window opened.

Former England striker Peter Crouch is also reportedly a Leeds target, but Gray, an ambassador for the club he represented across three decades, urged caution.

"Peter Crouch has played at a higher level, would he want to come back down to the Championship at this stage when he still has an opportunity to play in the Premier League?" he said.

"The boy Bridcutt has come in from Sunderland and has done well since he's come to the football club.

"You hope it goes like that if players like Lafferty, Crouch, Grealish or anyone else the club is mentioned with.

"Realistically, and Steve needs players to boost his squad to have a serious chance of getting in the top six this season. Players like that might come in only short-term and it might be worth it."

***William Hill is an official partner of the FA Cup. For the latest odds on all FA Cup action go to williamhill.com***