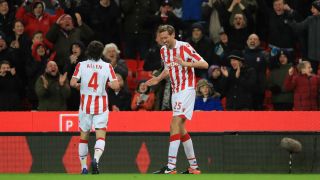 He's ruled the air for over a decade in the Premier League and now Peter Crouch is taking to the airwaves.

Known for using his head, Crouch will have to prove he's got the gift of the gab after being handed an evening slot by Radio X for a couple of weeks in pre-season

The former England man is a renowned music fan, dabbling in the agency business owned by his wife Abbey Clancy's brother, while the sight of the gangly striker crowd-surfing at a Kasabian gig is burned on most football fans' memories.

Luckily for listeners, Crouch breaking out the 'Robot' while he plays his favourite tunes isn't an audio-friendly feature...