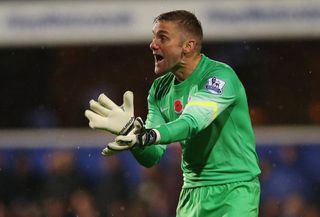 British tabloid reports claimed that Caulker was taken to hospital after a scuffle broke out in a pub where both QPR and Crystal Palace players were present.

"If you wanted an accurate headline on the story, it would be 'man falls over'," Green told BBC Radio 5 Live.

"I think that in response, the club have said pretty much what happened: he came out, slipped over and banged his head.

"But this is the nature of the beast in football. I must have been in a different bar.

"It was a Sunday lunch, after we'd had a tough week winning two games out of three, including a big win against Burnley. We didn't have a game until a week on Monday.

"We've got people far too old to be going out late at night, with me, Rio Ferdinand and Richard Dunne.

"Steven was back out of hospital and we had a laugh about it, and unfortunately it's made the front page of the paper."