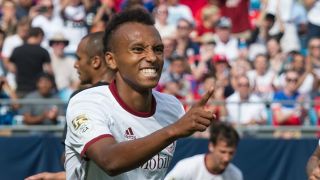 Bayern Munich youngster and United States international Julian Green was only too happy to leave a good impression on coach Carlo Ancelotti after scoring a hat-trick against Inter in the German giants' latest pre-season friendly.

Green is impressing everyone on Munich's tour of his homeland and while he was delighted with his hat-trick in a 4-1 win, he says scoring goals is just his job.

"That's my job. To score goals is always good for me, but that's soccer. One day it's not so good. The other day, it's better. I can play on the left wing or the right wing or in front. It doesn't matter to me."

Green said it was only natural that he would improve given the calibre of players he trains and plays with, including World Cup winners Xabi Alonso and Thomas Muller.

"I'm really proud and happy to have these guys around me," said Green.

"I'm very happy to play with them. I can learn a lot from them. I work hard every day. That's the only thing I can do. The only thing on my mind is to work hard."

The USA international's work ethic has not gone unnoticed with Ancelotti, either.

"He did very well. He scored three goals. He was great in the box. It was a really good performance. The team built good offensive play and Julian was ready to finish," Ancelotti said.

"He trained with us. He will have the opportunity to start and to play. He can play, and he is ready to play. He's improving. He's working well during the training sessions."

Alonso was also impressed, adding: "Hopefully it will be important for his development. Many American players are playing over in Europe as well as here in the MLS. Whenever they play in the final competitions [World Cup] they are showing great [performances]."