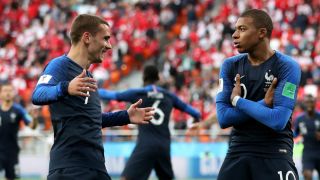 France might have five full days to rest before their World Cup quarter-final against Uruguay but Antoine Griezmann is unable to get a bit of shut-eye without being roundly mocked by his team-mates.

The Atletico Madrid star was at the heart of France's thrilling 4-3 victory over Argentina in the round of 16 on Saturday, scoring the opening goal of the game from the penalty spot and causing the South Americans' defence problems throughout.

His efforts took their toll and when he stretched out for forty winks at France's training camp in Istra on Sunday, he doubtless assumed he would be given a little privacy.

Instead, Benjamin Mendy and Kylian Mbappe pounced on the opportunity to grab a selfie with the talismanic frontman, making 'loser' gestures on their foreheads as they did so.

Poor Griezmann remained unaware as Mendy posted the resulting photo up on his Twitter account for the enjoyment of more than 846,000 followers, even suggesting Griezmann had been up too late on Saturday night playing computer games.