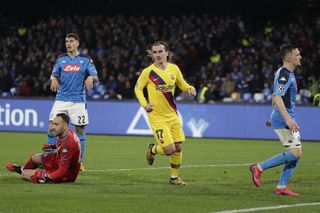 Antoine Griezmann’s second-half equaliser cancelled out a fine opener from Napoli midfielder Dries Mertens to give Barcelona the upper hand in their Champions League last-16 tie.

Belgian Mertens had made the most of the Italians’ solid start to curl home an effort after 30 minutes.

However, after the midfielder was forced off with injury following a heavy challenge from Sergio Busquets, Barcelona drew level when Griezmann lashed the ball in from close range.

Neither side was able to conjure a winner, Barcelona goalkeeper Marc-Andre Ter Stegen making two smart saves as the first leg finished 1-1 at San Paolo.

The visitors finished with 10 men after Arturo Vidal was shown two quick yellow cards following a tackle on Mario Rui and then pushing his head into the face of the Napoli man during the closing stages.

Lionel Messi, who scored four goals in the 5-0 win over Eibar which put Barcelona top of LaLiga, sent an early chance over before Napoli made a breakaway count as Mertens swept them in front.

We think he enjoyed that one! 🕺— Football on BT Sport (@btsportfootball) February 25, 2020

Piot Zielinski won possession from Junior Firpo and charged down the right before cutting the ball across the edge of the Barcelona area.

Mertens took a touch before curling a wonderful finish over a static Ter Stegen and into the top corner – a strike which saw the Belgian become Napoli’s joint record scorer, level on 121 goals with Marek Hamsik.

Barcelona looked for a swift response before half-time but failed to stretch the home defence or test keeper David Ospina.

The Partenopei could have been further ahead after 42 minutes when a free-kick was only partial cleared, Fabian Ruiz fed Jose Callejon and his cross was fired just wide by centre-back Kostas Manolas.

Barca came out with more intensity at the start of the second half.

Busquets caught Mertens with a high tackle which saw the defensive midfielder shown a yellow card and the Belgian eventually hobbled off, to be replaced by Arkadiusz Milik in the 54th minute.

Napoli continued to be pushed back by Barcelona’s press and Griezmann equalised after 57 minutes.

Nelson Semedo beat the offside trap from Busquets’ pass when he darted into the right side of the area and crossed for the French World Cup winner to smash the ball in from close range.

Captain Lorenzo Insigne weaved his way into the left of the Barcelona area and forced Ter Stegen into a low save.

The German was alert again to come off his line and block from Callejon.

At the other end Messi looked to get on the end of an exchange with Vidal and collided with Ospina as the Napoli keeper made a brave save, which saw both players need treatment.

Umtiti headed over a corner from Messi before Vidal saw red, meaning he will be suspended for the return at the Nou Camp next month.

Defender Gerard Pique also limped off during stoppage time with what looked like an ankle problem.