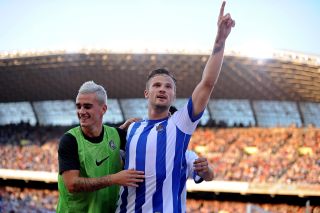 The 22-year-old came up through the ranks at Sociedad after moving to Spain as a teenager, but Lyon was the club he followed while growing up, meaning the play-off first leg at the Stade de Gerland will be an emotional occasion for him.

"For me, Lyon has been my club since I was a kid," he said. "I used to come to see all the Champions League matches here with my father. Seen from Spain, Lyon are a club that counts, a historic club.

"The moment I stepped on the Stade de Gerland pitch, I felt a lot of emotions. I even pointed out the spots in the stands where I used to sit.

"I can't wait until I put my boots on tomorrow. But there's no feeling of revenge: I just want to play. This will be my first competitive match in France with Real Sociedad - and to top it off, it'll be a Champions League match."

Griezmann sealed Sociedad's place in the Champions League with a goal against Deportivo La Coruna on the last day of the 2012-13 La Liga campaign.

The Basque outfit have not competed in Europe's premier club tournament since reaching the final 16 in 2002-03, where they were knocked out by Lyon.