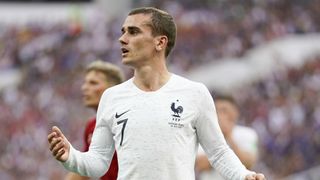 Antoine Griezmann plans to end his career in MLS, but is first focusing on his "obsession" of World Cup success with France.

The Atletico Madrid forward tasted glory in the Europa League this season, scoring twice in the final against Marseille, and has signed a new contract with the LaLiga side to end speculation he could switch to Barcelona.

Griezmann was top-scorer at the European Championships two years ago as France lost the final on home soil to Portugal and, ahead of a last-16 tie with Argentina, Griezmann made his intentions clear.

The 27-year-old striker is eyeing further success with Atletico in Europe and also wants to end France's 20-year wait for a World Cup title, before finishing his career in MLS.

"World champion, win a Champions League and then I can go and quietly play in the USA. That's my ideal itinerary. It's not bad, is it?" he told Le Figaro.

"If the plan goes like that, I'd sign for that now. I don't know at which age I want to play in MLS, it'll all depend on the trophies I'll have won beforehand.

Griezmann, who scored a penalty against Australia in France's opening 2-1 World Cup victory, has put those plans to the side for now and is fully focused on Russia 2018.

"Frankly, winning that competition with your country is the best thing possible. I want to finish my career with that trophy in my cabinet," Griezmann added, with France taking on Argentina on Saturday in Kazan.

"It'll perhaps be this time, or the one after in Qatar [in 2022]. But I don't want to finish my life as a footballer without that title among my honours.

"I think about it very often. It's an obsession."