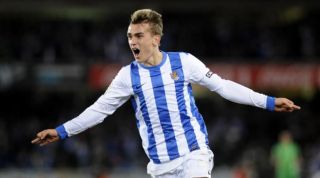 Griezmann has enjoyed a marvellous season with Sociedad, scoring 20 goals in all competitions, with his form earning the 23-year-old his first France cap against the Netherlands last month.

A number of clubs have been linked with Griezmann, with reports in Spain indicating that a deal to take him to the Parc des Princes had been agreed.

But Griezmann has quashed those rumours, insisting that his only focus is on helping Sociedad seal UEFA Europa League football for next season.

"I have no idea about it (the PSG speculation)," Griezmann told French television show Canal Football Club.

"I've read articles which said that I'd said yes to PSG but there's been no contact and no agreement.

"I want to finish my season with Real - to try to get a good place in the league to get into Europe.

"When a big club is interested in you it's always nice.

"But I'm thinking about my club and after that we'll see what can happen."